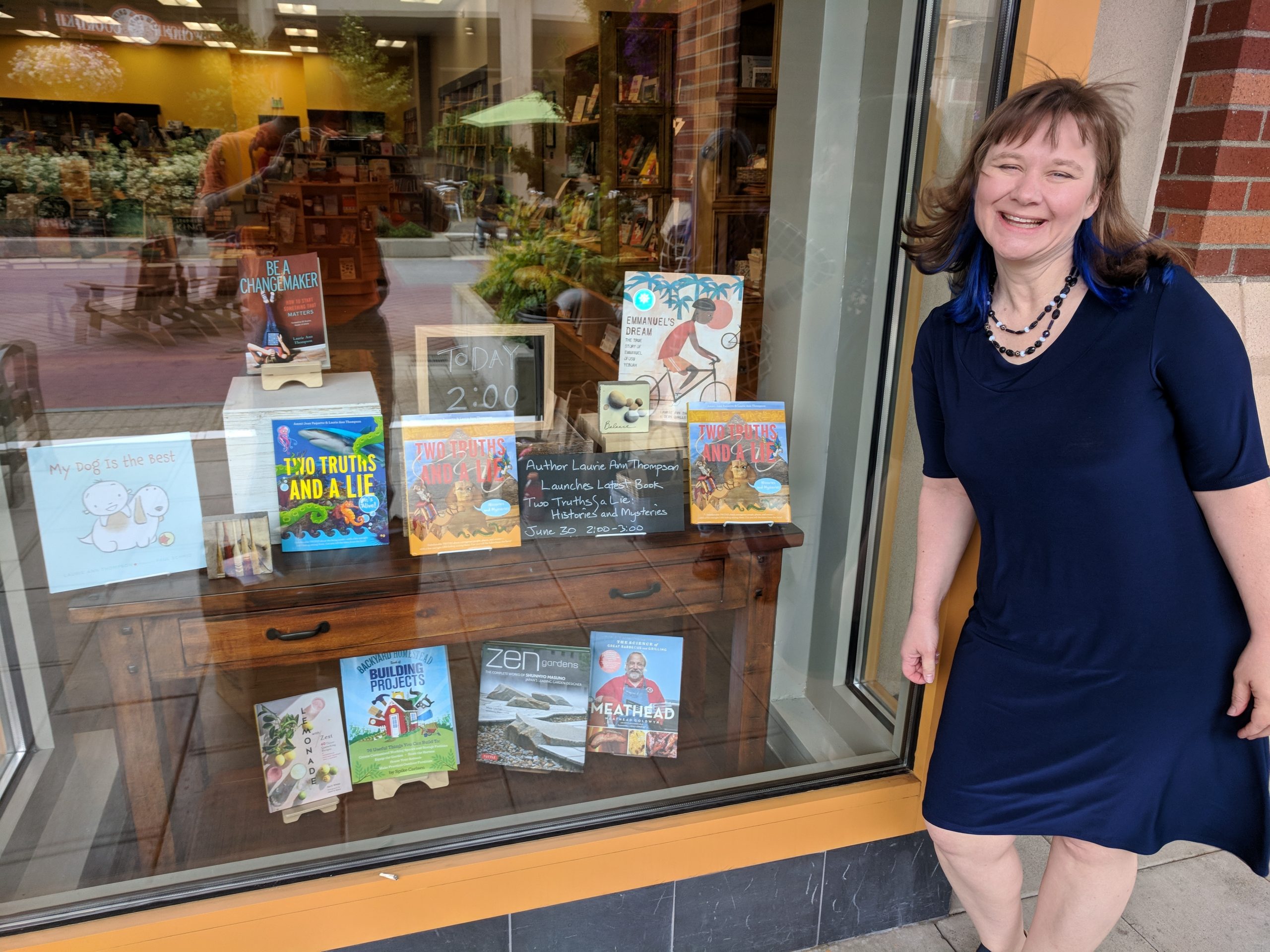 I wanted to share some of my favorite photos from the Two Truths and a Lie: Histories and Mysteries launch party last Saturday at Brick and Mortar Books: 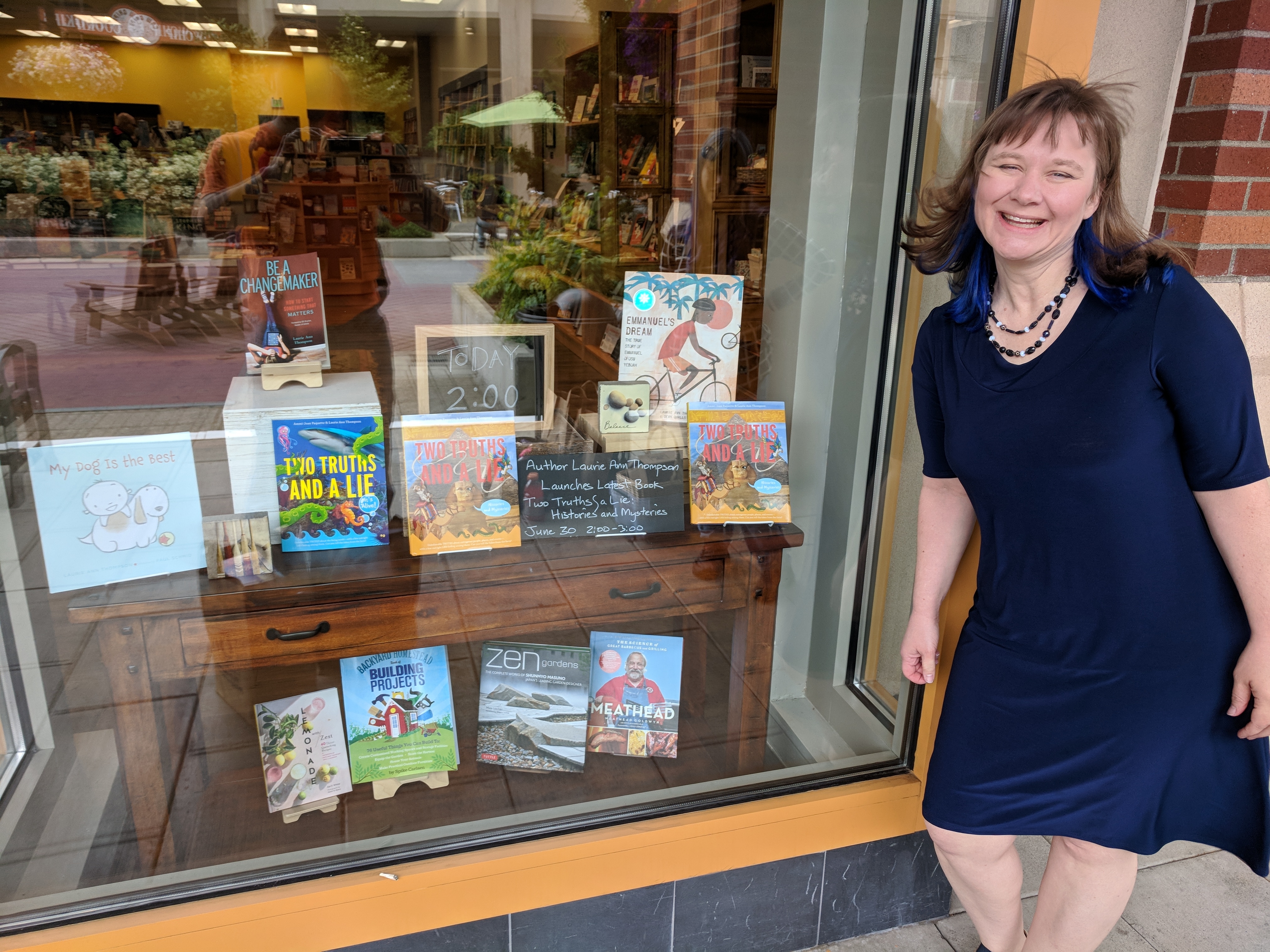 This is the window display that greeted us when we arrived at Brick and Mortar Books! So nice!! 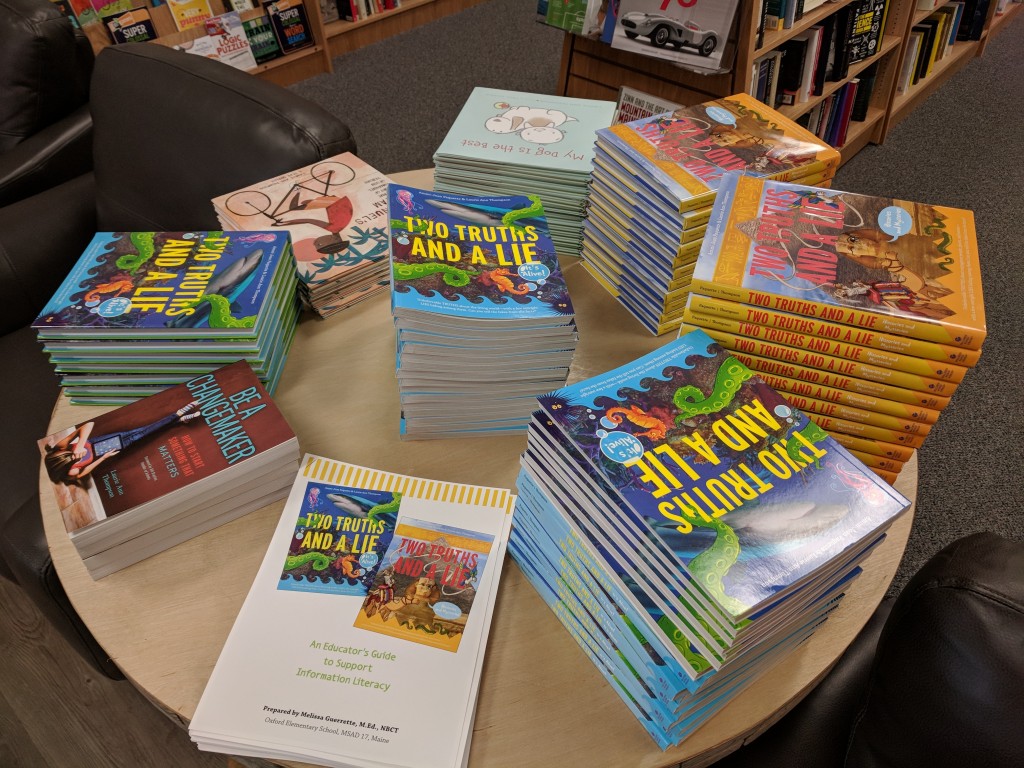 They had loads of books ready for sale! 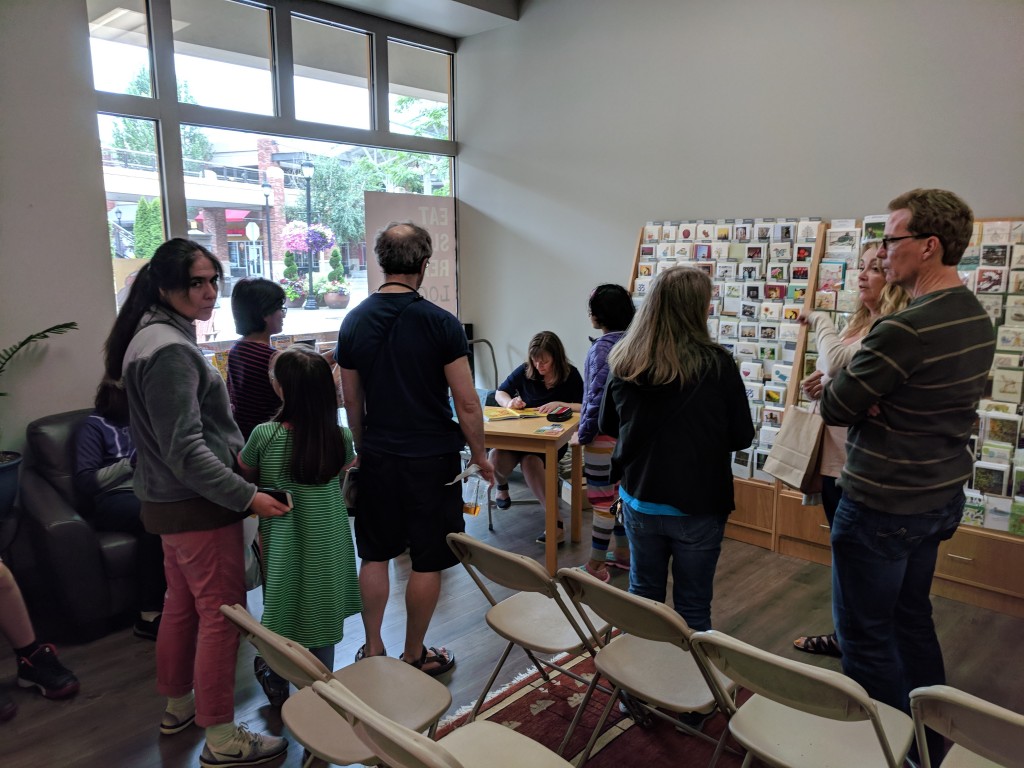 The signing line starts to form. 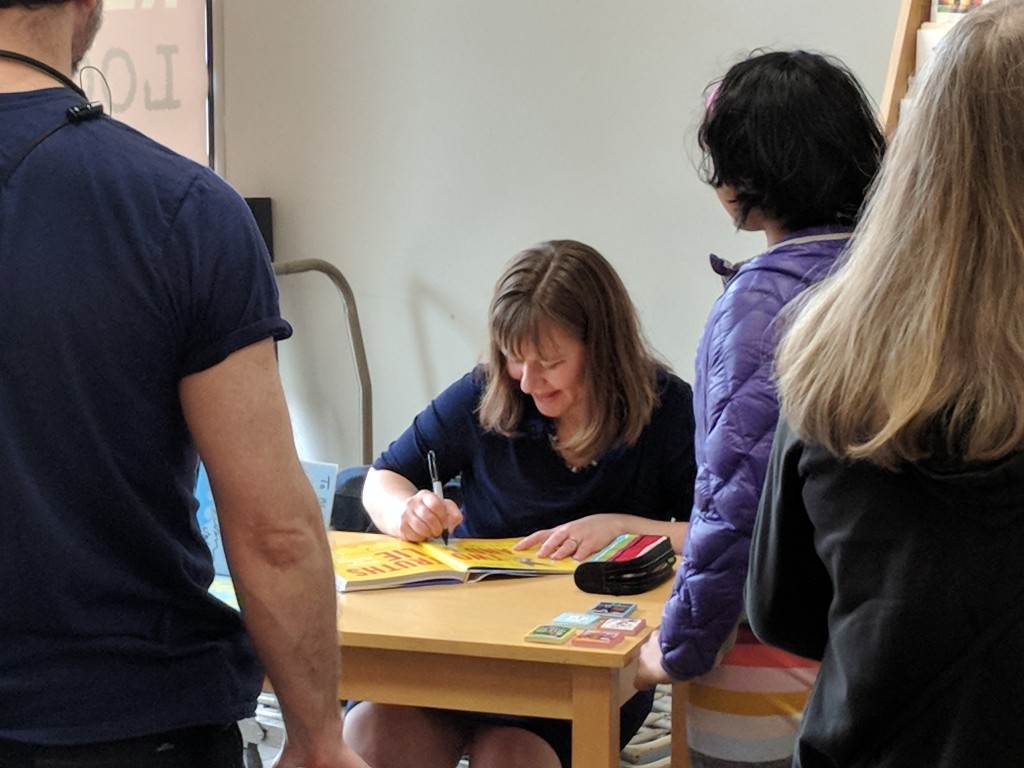 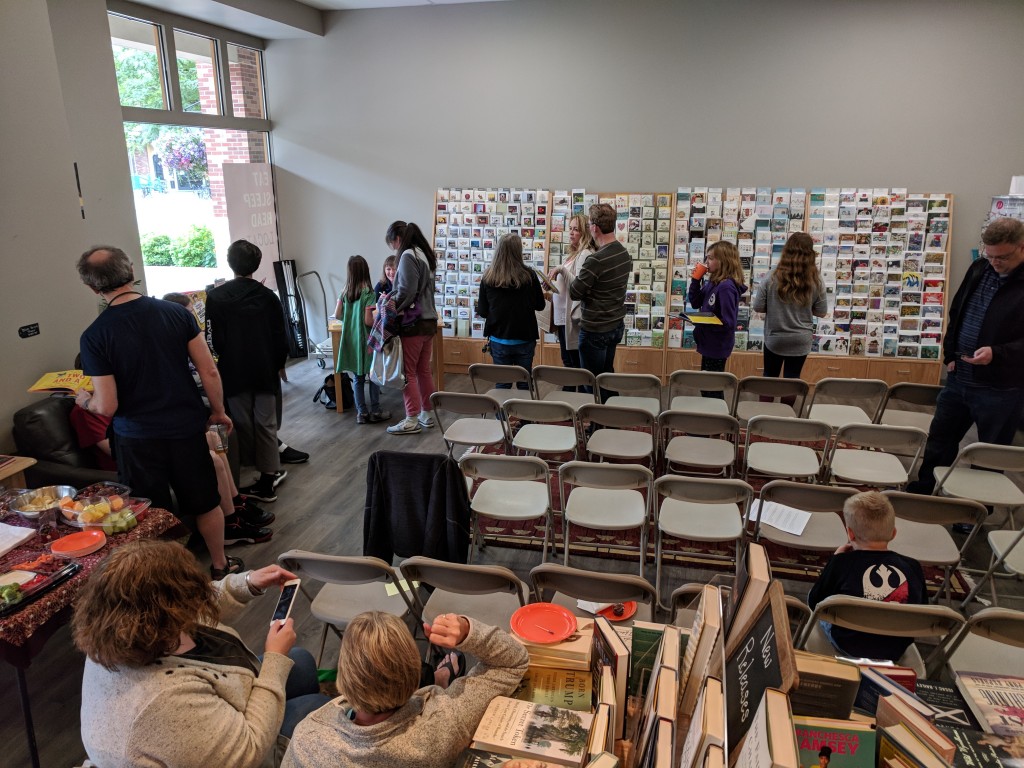 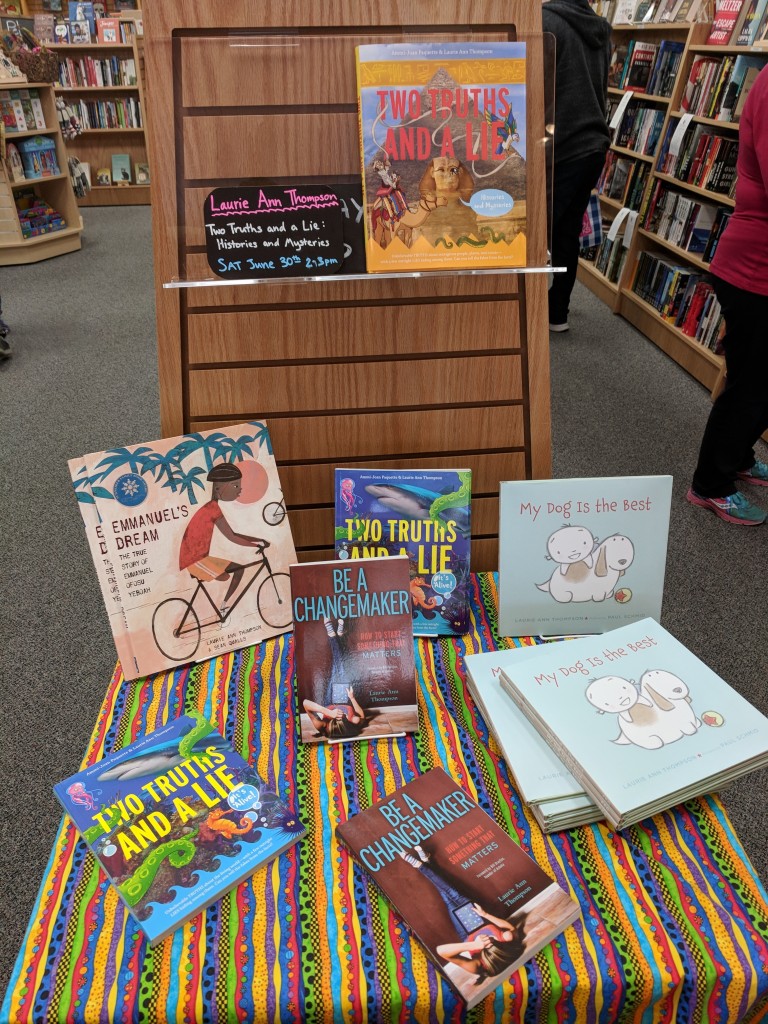 Brick and Mortar even had a full end cap display! 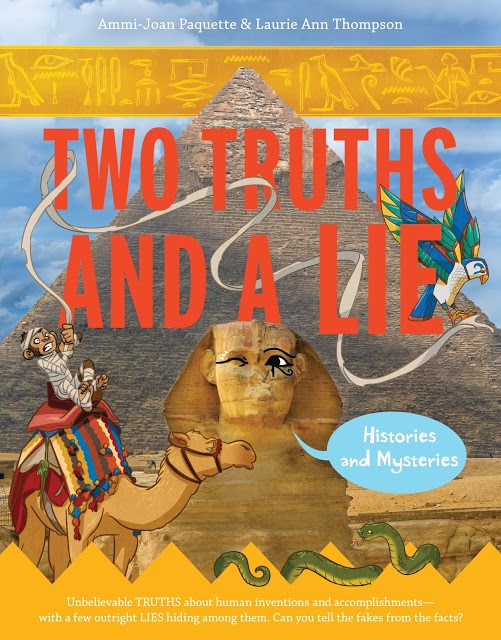 A trivia-style game-show challenge. . . with prizes!

To RSVP, please visit the event invitation here. Thanks!

** Come early to enjoy the fabulous Redmond Saturday Market before the event! 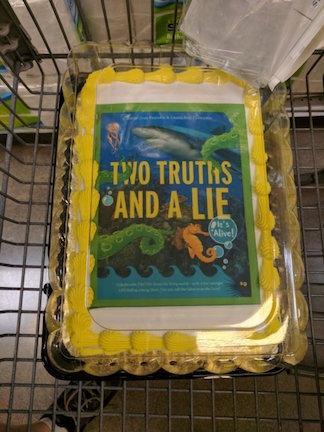 Okay, so it’s been more than a month since the launch party for Two Truths and a Lie: It’s Alive!, and this post is _way_ overdue. In my defense, we’ve been hard at work on the second book in the series, and a writer has to have her priorities, right? Alright, so perhaps there’s no reasonable excuse for how neglected my poor blog has been lately, but I’m vowing to try to do better going forward. And I definitely want to share some of the highlights from the launch party, so in the better-late-than-never category, here we go! =D
First, the cake! In the flurry of activity getting ready for a launch party, I always forget to take a picture of the cake at the actual event, so this time I took a picture of it in the shopping cart when I picked it up. It’s a good thing, too, because this is, sadly, the only picture I have of it.

There were also gluten-free cupcakes with decorations that said, “The cake is a lie.” (That’s a geeky gamer reference, in case you haven’t heard it before.)
Before we even started the actual launch party event, I got to sign a book for a brand-new fan who just happened to be in the store when we started setting things up. Fun! 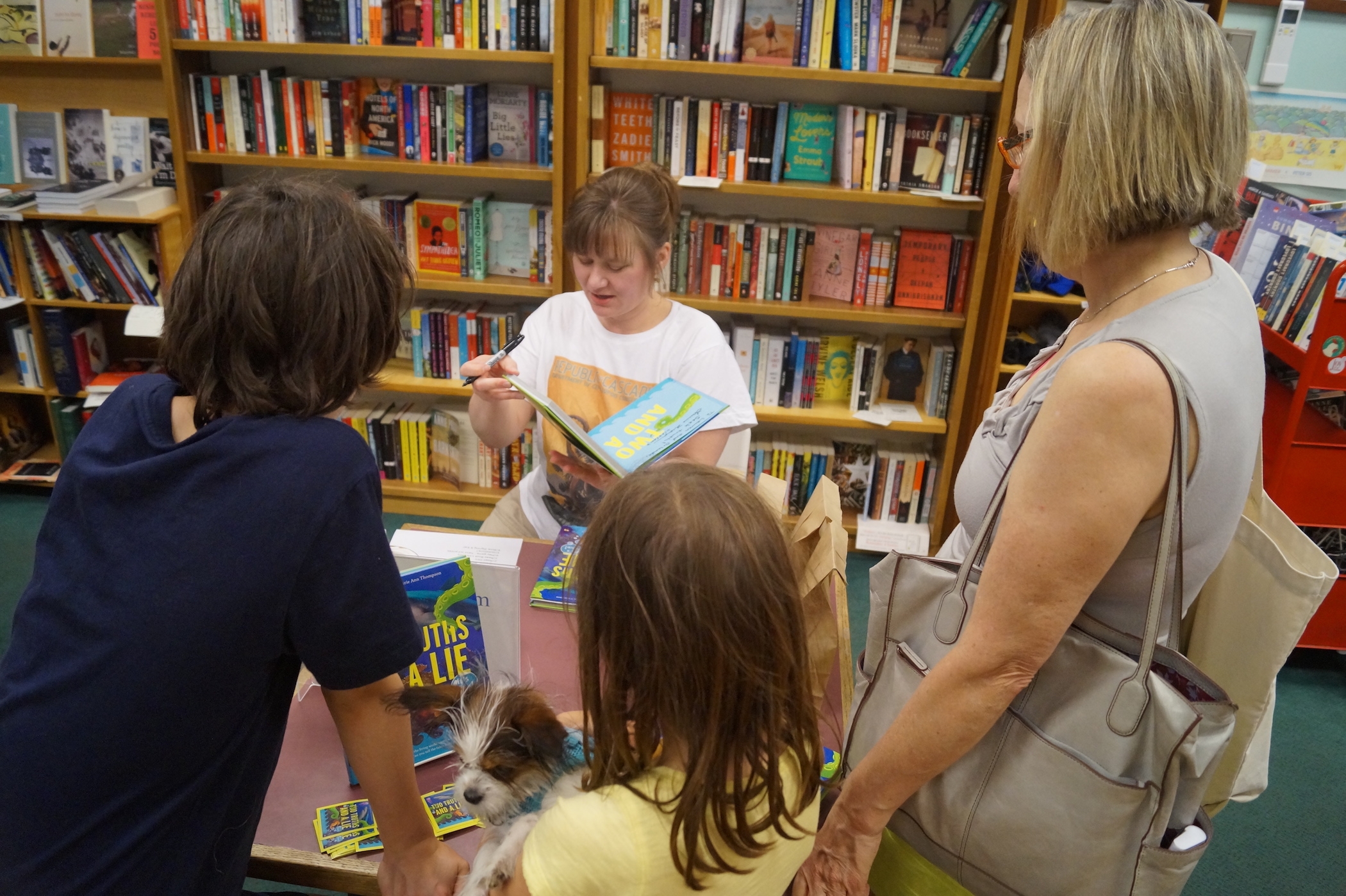 After thanking everyone who helped make this book possible (in broad strokes, because I could go on all day!), I did a little reading from the book. (You can’t have a launch party without a reading, right?) Since we were in a bookstore surrounded by books, I selected the story about book scorpions and book lice. What are those, you ask? You’ll have to read the book! And then you’ll have to decide if they’re real or not. 😉 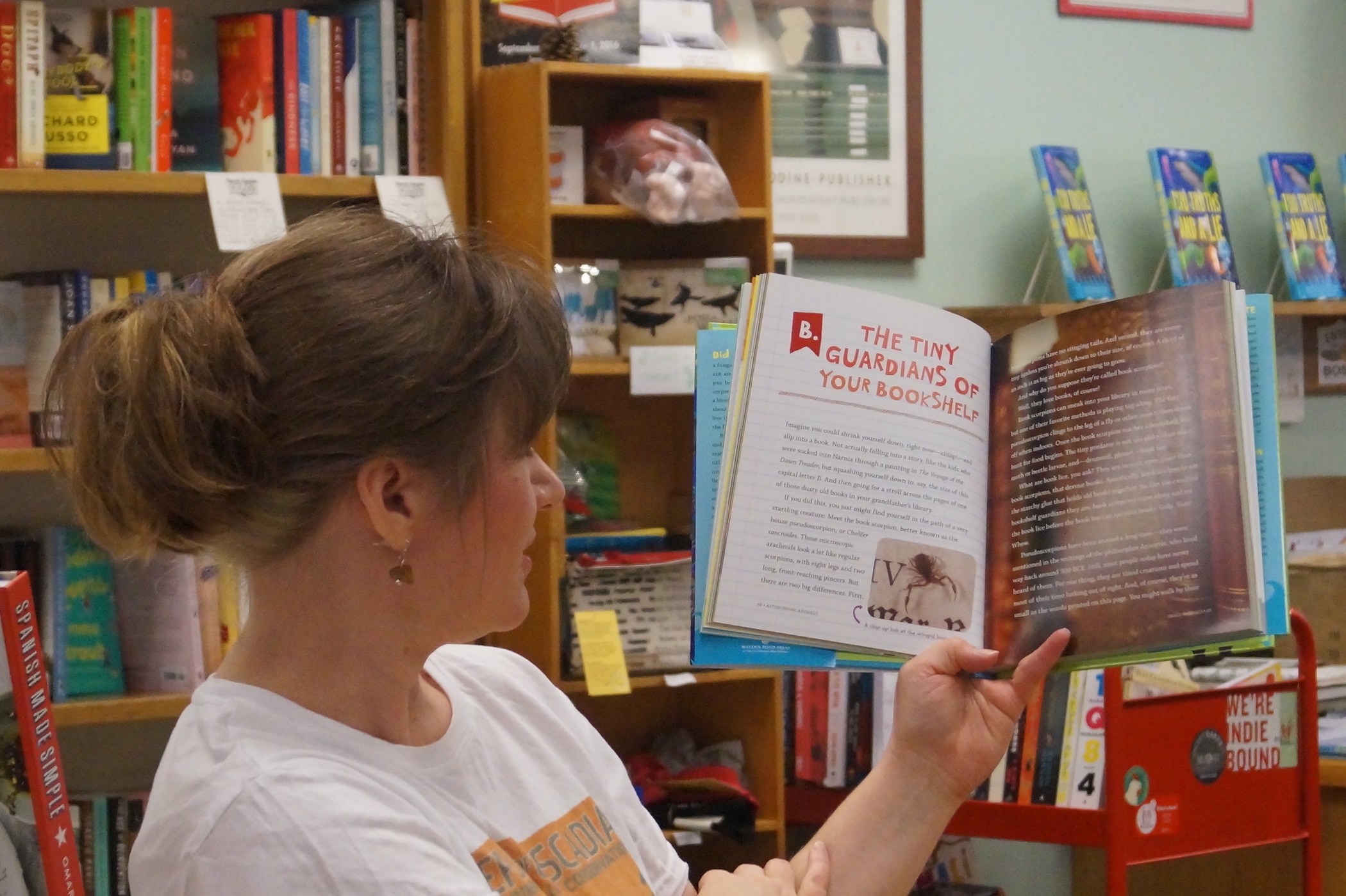 Then we played a game show-style quiz game, using our smart phones. To my immense relief, it worked! People could answer using their devices and the system would let me see who answered the most questions the fastest. 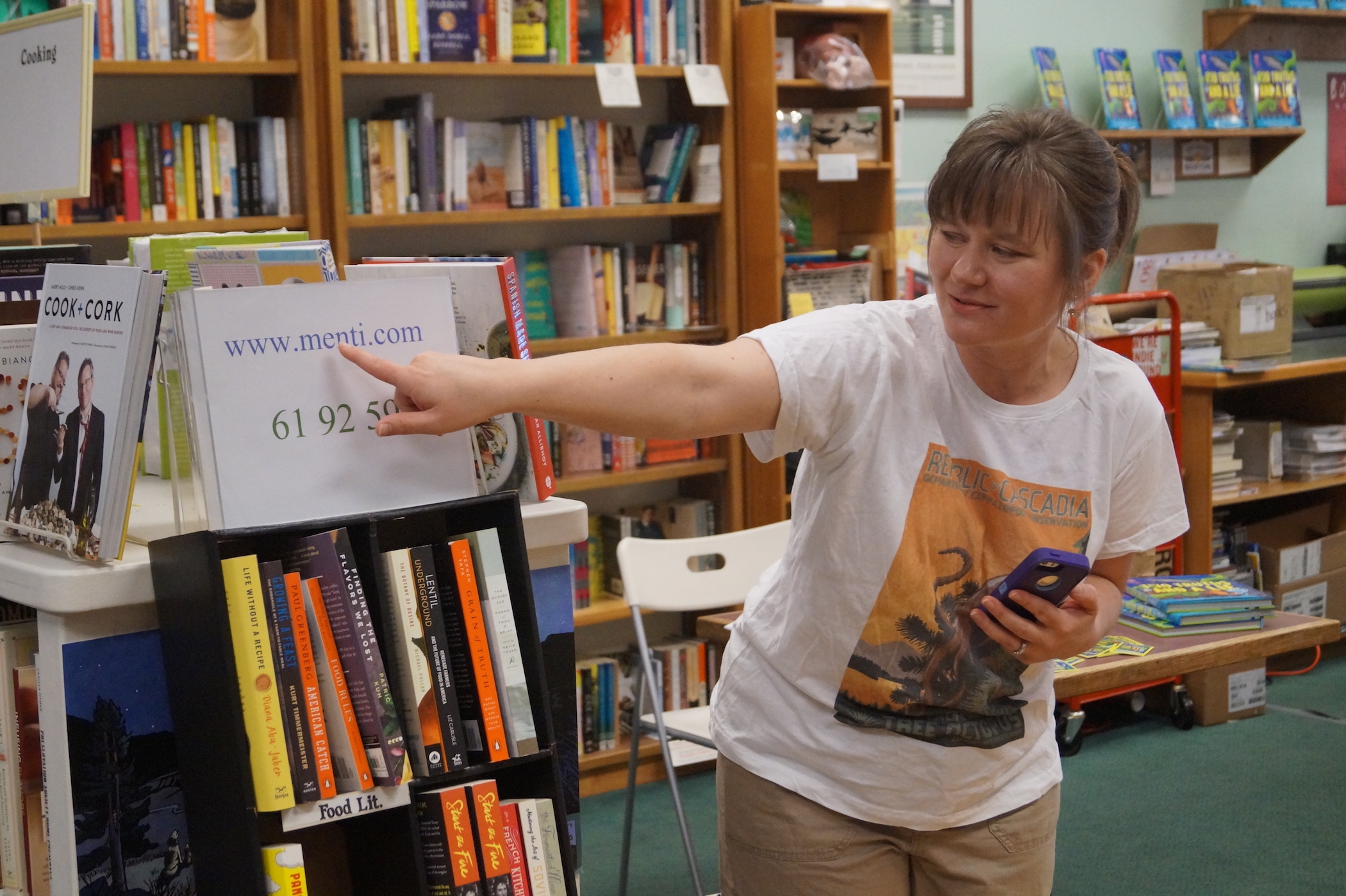 Kevan won the first prize–a Bigfoot Air Freshener for his car. (Is Bigfoot a truth or a lie?) 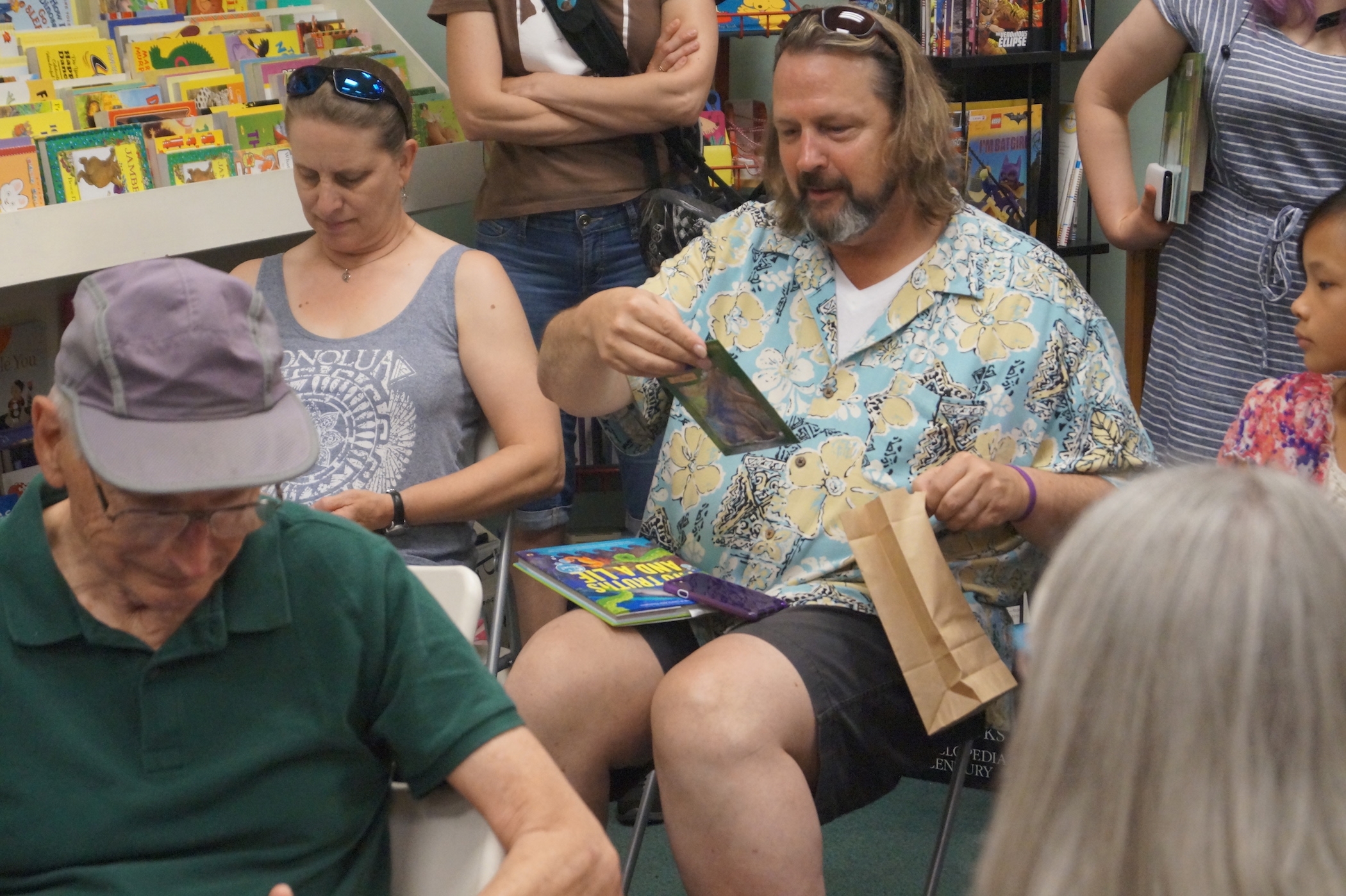 She looks worried! I wonder what was in her bag? Ah, yes… I think it was the Groucho Marx Disguise Glasses (so she can fake her identity). 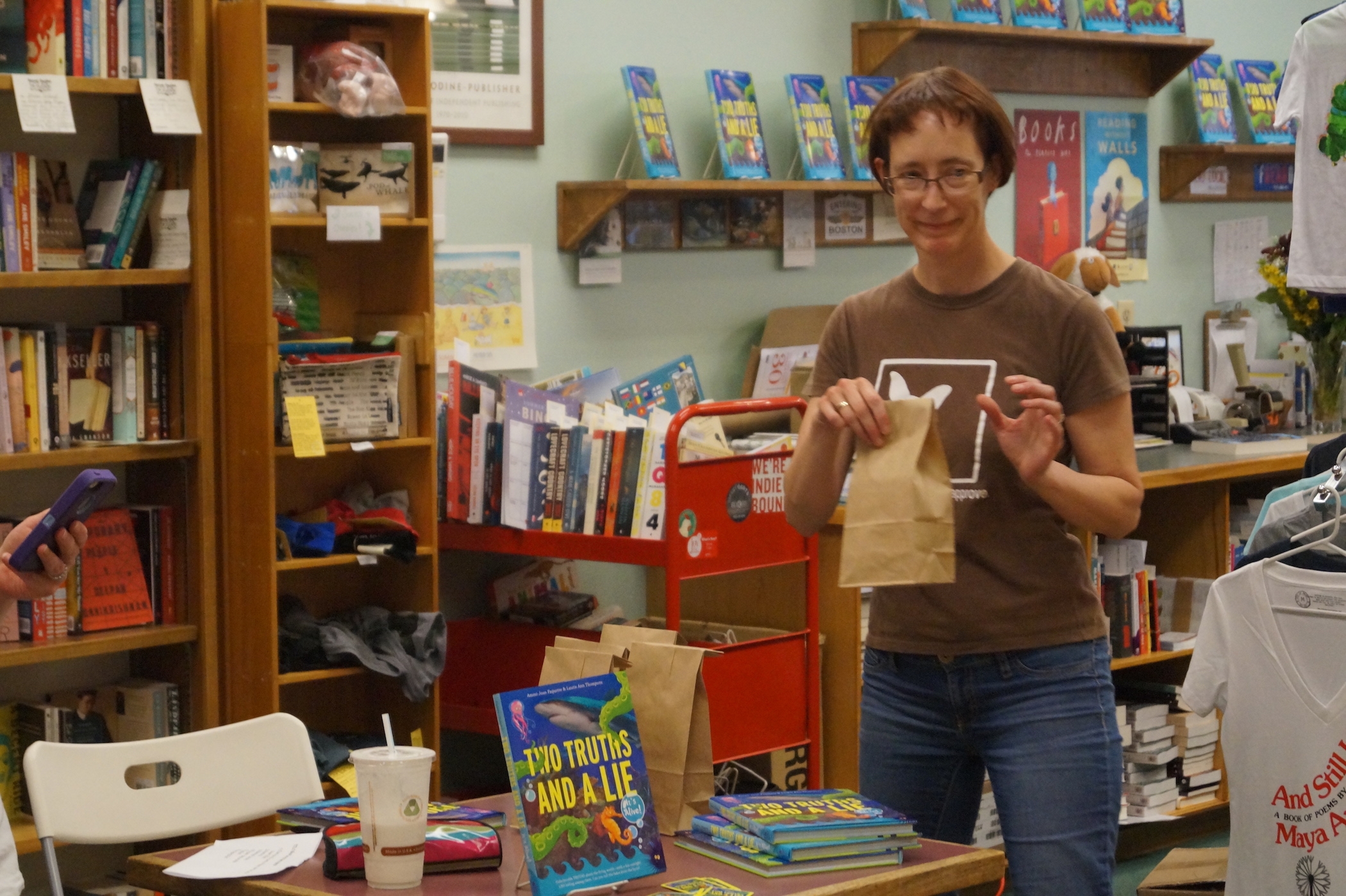 Dan was so excited to see what he won that he ripped open the bag and sent his prize flying halfway across the store! Fortunately, it didn’t hit anyone. If I recall correctly, he got the Enchanted Unicorn Bandages. (Are unicorns real?) 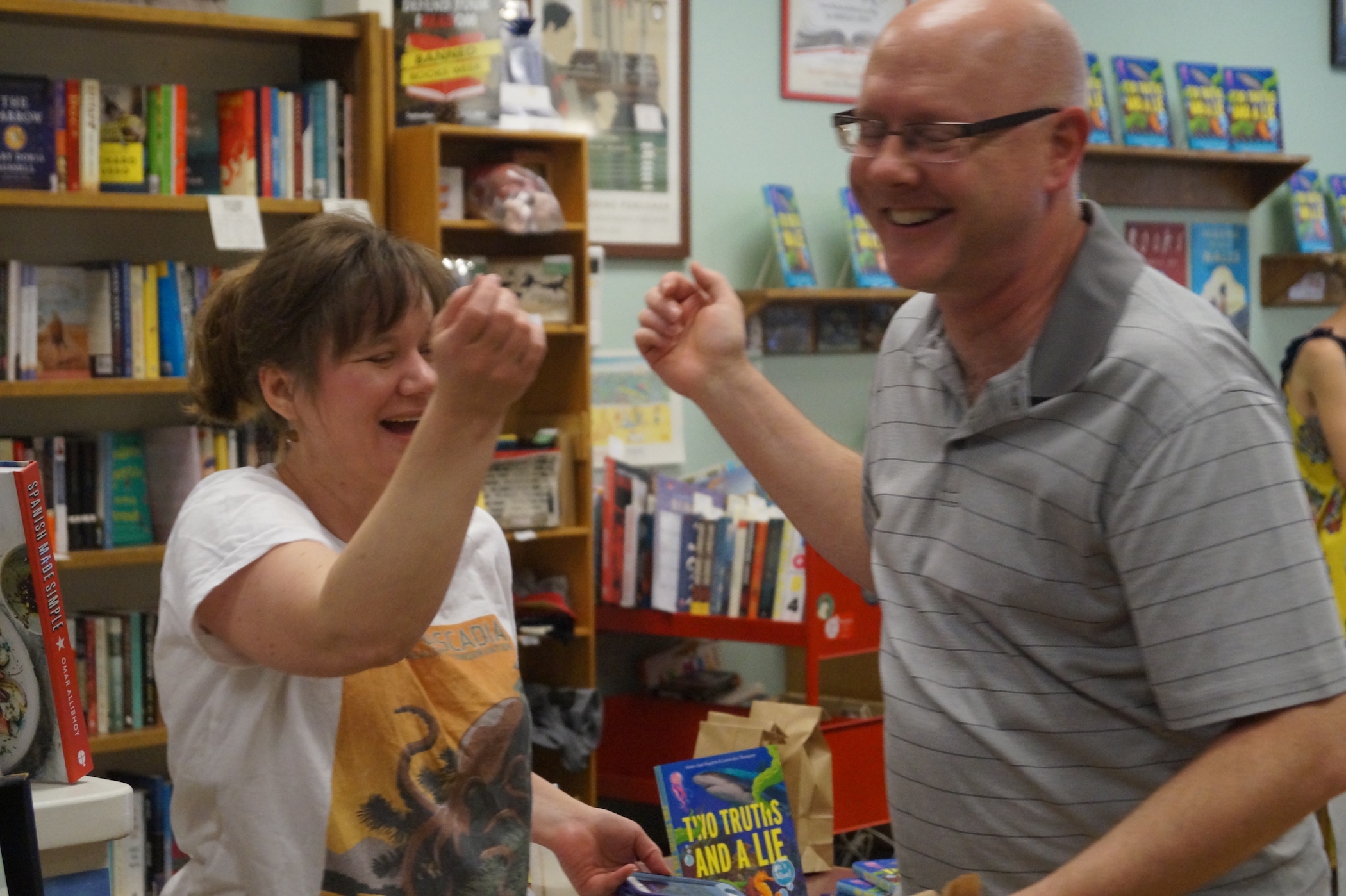 This young guest was clearly thrilled to win the Glow-in-the-Dark Jellyfish Ornament! (It’s as close as I could get to a Pacific Northwest tree octopus (see chapter 5) or the Praya dubia (chapter 6). 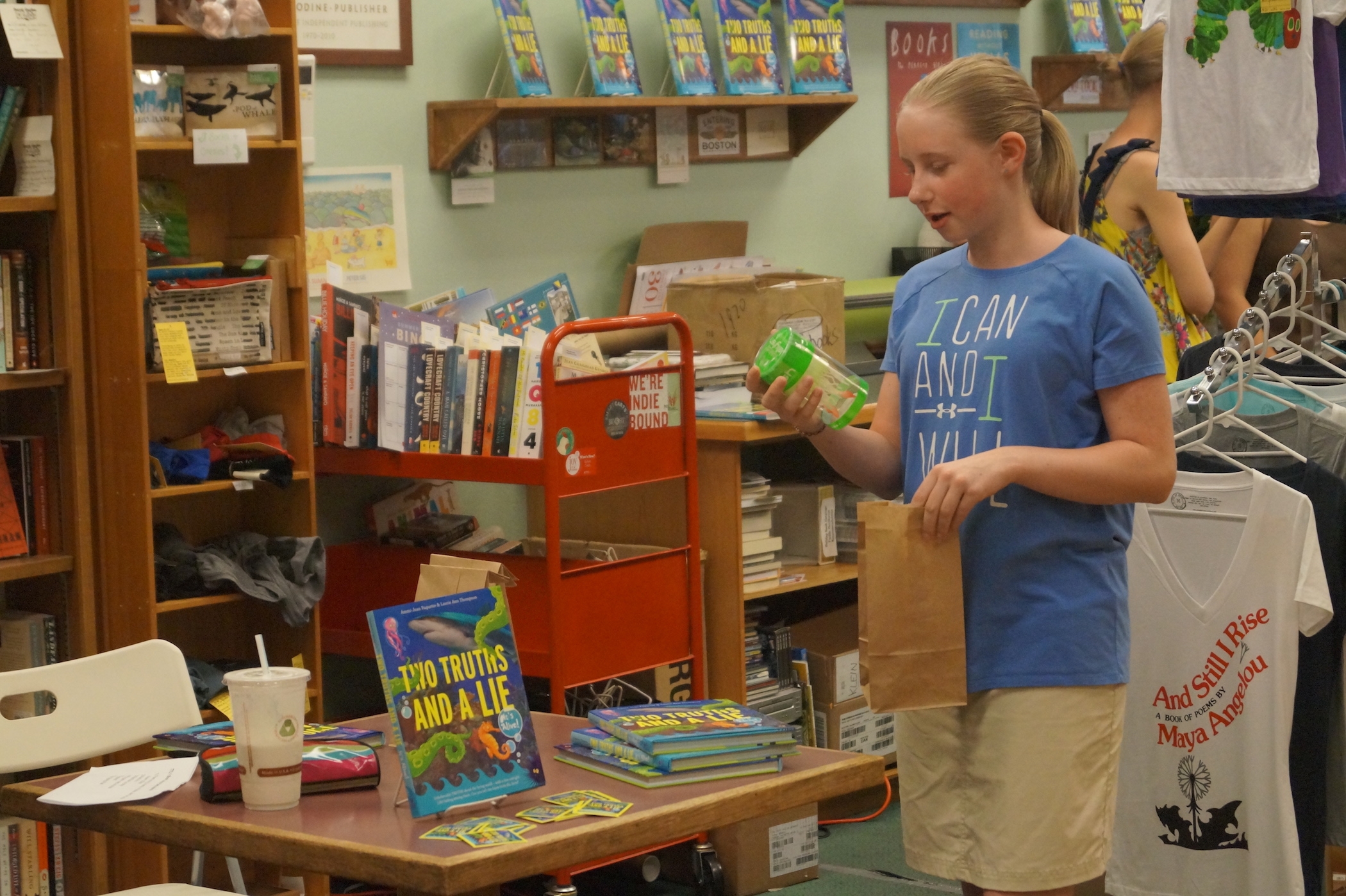 What did Laura Moe win? Was it the Dr. McPhee’s Snake Oil Soap? I think so! 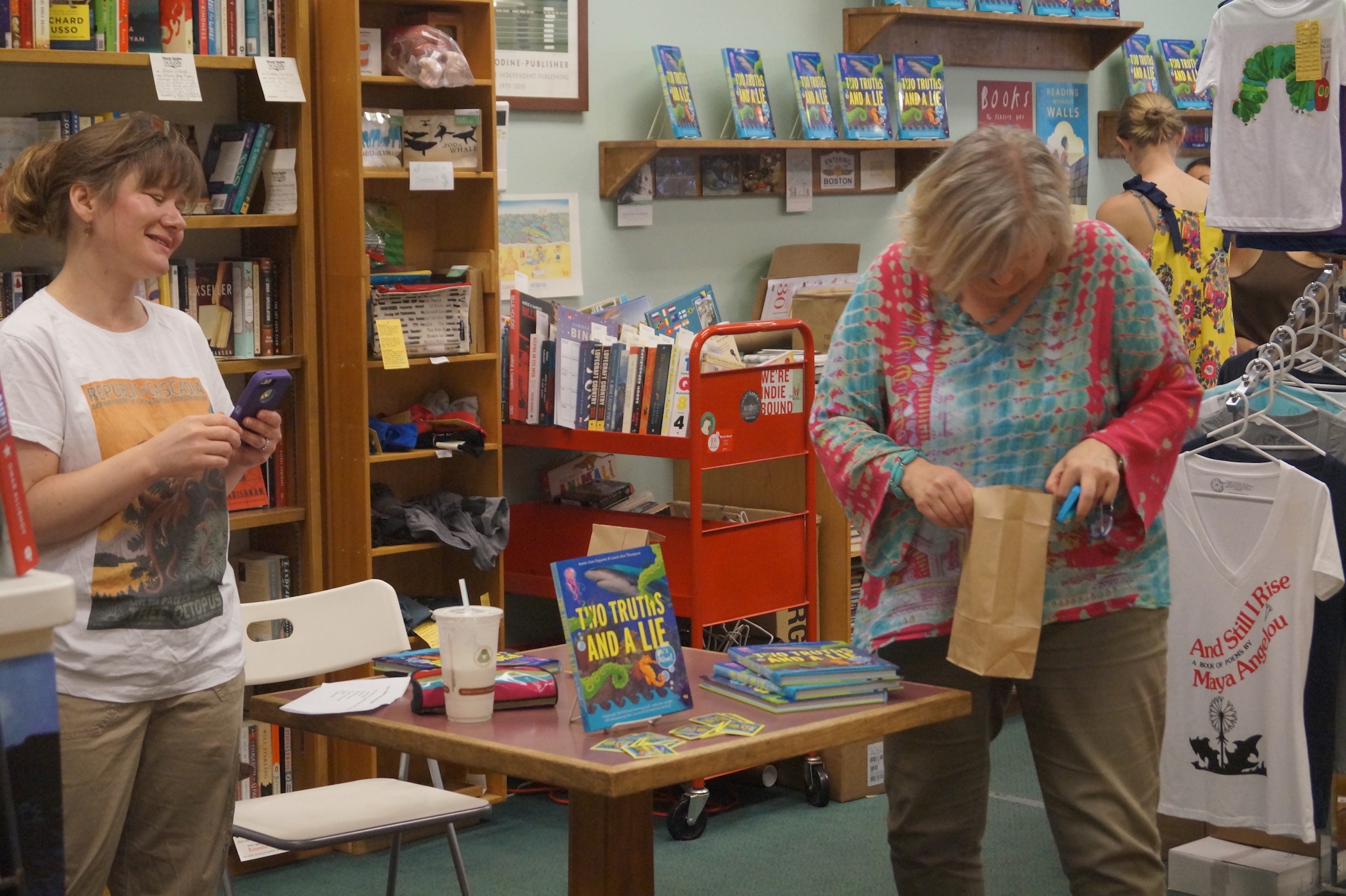 And, finally, the grand prize winner… Alan won his very own Mike the Headless Chicken (see chapter 5)! Fortunately, this one is just plastic and doesn’t require food and water through an eye dropper. 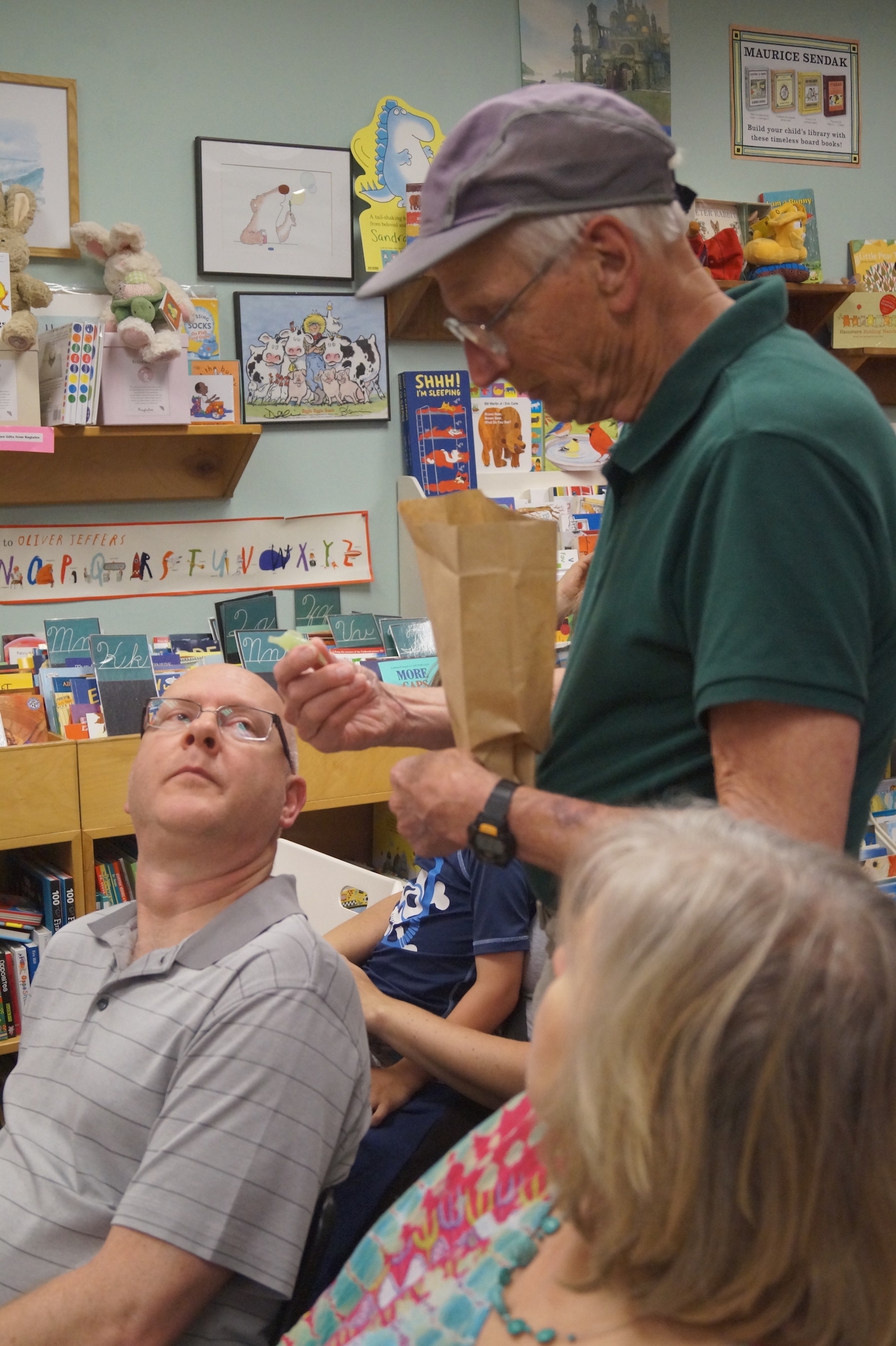 It was a great launch party and such a memorable day. Thank you again to everyone who helped make this book happen, to Secret Garden Book Shop for hosting my launch party yet again, to Curtis Manley for catching all of these fantastic photos for me (except the cake in the shopping cart, of course), and to everyone who came to the event. I love being part of such a supportive community of writers, booksellers, and readers! 💙 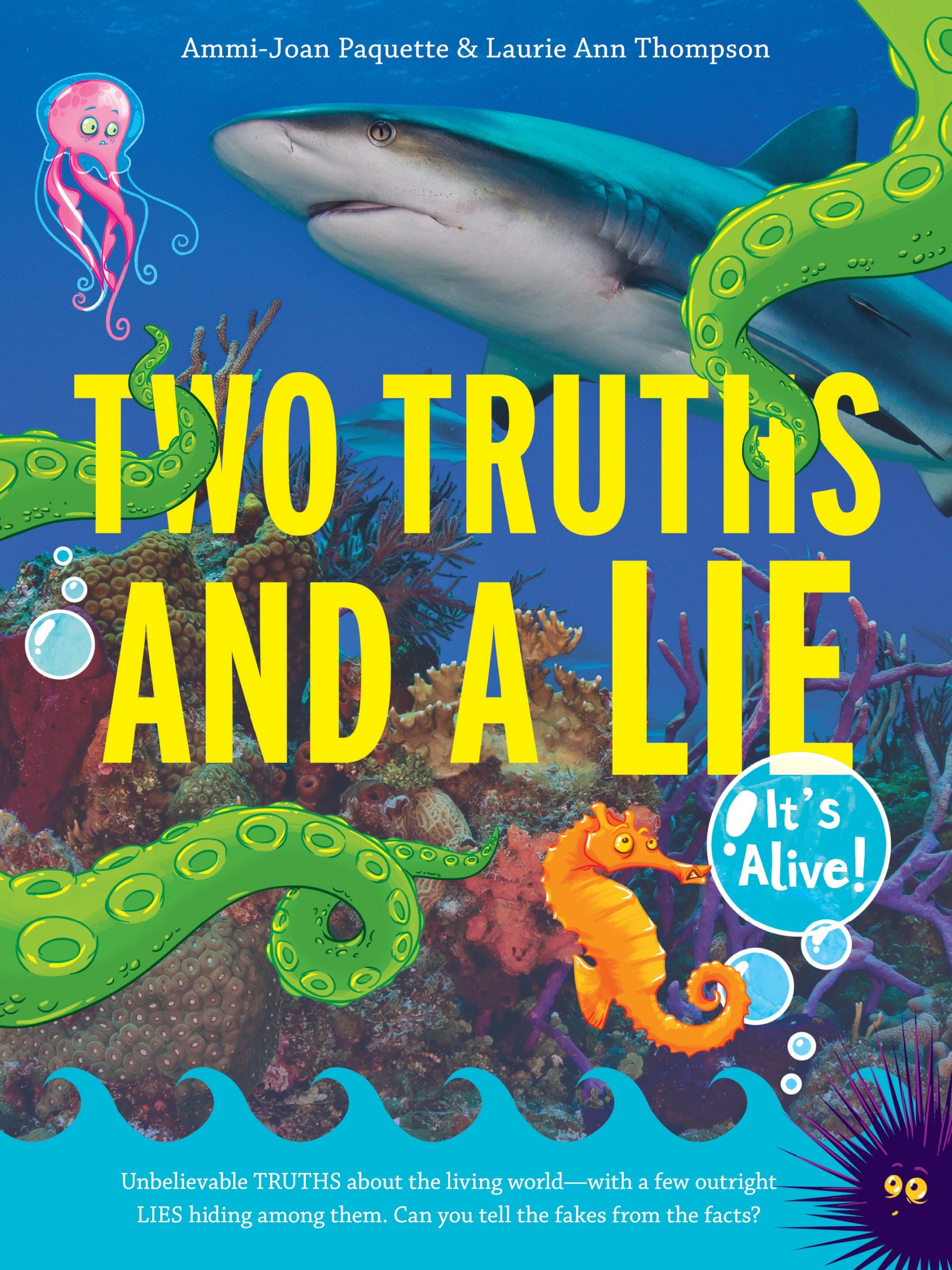 A trivia-style game-show challenge. . . with prizes!

** Come early to enjoy the fabulous Ballard Farmers Market before the event!

If you can’t make it to the party but would like to pre-order a signed copy, please visit http://www.secretgardenbooks.com/book/9780062418791 and put the dedication info in the Order Comments box. Thanks! =D 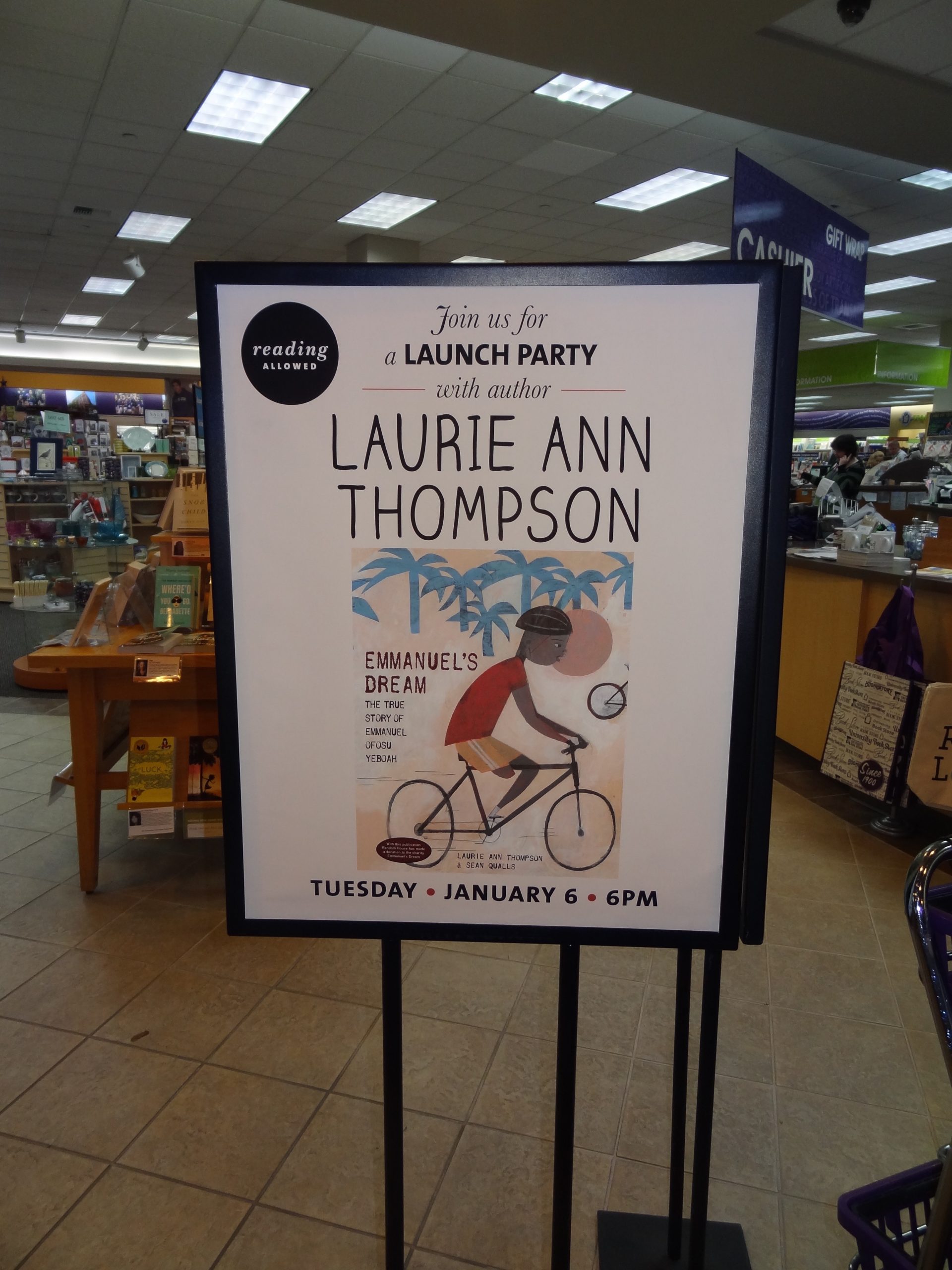 With the holidays right before, I must admit that the launch party day sort of snuck up on me. I was rushing to get everything ready, had to give up on some things that I wanted to do, and didn’t have as much time as I would’ve liked to prepare. Still, I think a great time was had by all. I know I enjoyed every minute!

Many thanks to Emmanuel for inspiring me; to Sean Qualls for his beautiful artwork; to my family for supporting me all this time; to my critique group for helping the manuscript rise above the slush (especially Dana Sullivan, for taking these great pictures for me!); to my agent, Ammi-Joan Paquette, for not giving up; to the University Book Store in Bellevue and their event planner, Olivia Ahl, for throwing such a wonderful party; and to all the friends, writers, teachers, parents, neighbors, and community members who took the time to come out and cheer me–and the book–on last Tuesday night. You all ROCK, and I am one extremely lucky gal! xoxo 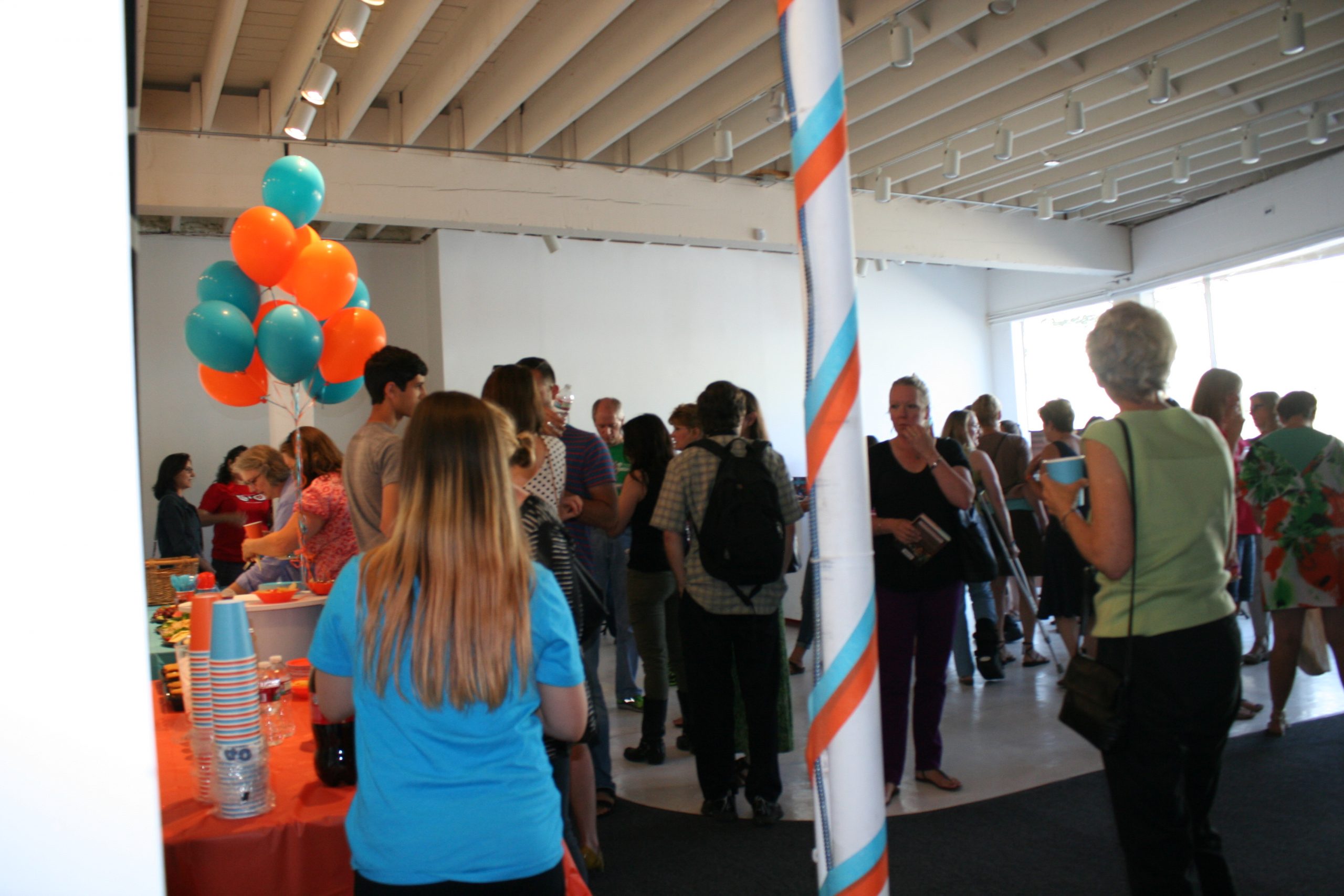 Two of the worst possible things that could happen to a book event in Seattle happened on the day of the Be a Changemaker launch party: one of our major bridges was closed for construction, and the sun was shining! Still, an amazing number of ultra-dedicated friends and intrepid fans braved the traffic nightmare and willingly (or perhaps begrudgingly) sacrificed one of the last sunny Sundays we are likely to have for months. And I am oh-so-grateful to each and every one of them for it!


I started with a brief thank you. I could have gone on for hours thanking everyone who played a part in this book, but I decided to spare those in attendance and kept the list as short as possible.
Then I gave a short reading from one of the In My Experience sidebars in the book. I started getting choked up and didn’t want to break down into ugly cry in front of all those people, so I cut it shorter than I had intended. Run away!
My favorite part was when four local teens, whose organizations are among those featured in the book, presented a bit about what they do and where their groups are headed. They were all great speakers and held the audience in rapt attention.
Then, it was time to sign books! I was so afraid I would spell someone’s name wrong, I even asked on the easy ones that I knew for sure I knew how to spell.
By the end, though, my eyes were starting to cross. I hadn’t made any mistakes, so I let my guard down. One of the very last people in line is one of my dearest friends, whose name happens to be EXACTLY THE SAME AS MINE. Yes, you guessed it: I spelled it wrong. Fortunately, she has a good sense of humor, so we’ll probably be laughing about it for years to come.
Many heartfelt thanks to everyone who came and to Secret Garden Book Shop for hosting. I’m generally not much of a party person, and I really dislike being the center of attention. (Those giant posters of my face were a surprise from my hubby… eek!) But every moment of that launch event was a treat, and the experience is something I’ll treasure for the rest of my life.

One of the most rewarding experiences of being a debut author has been participating on the Emu’s Debuts group blog (for clients of Erin Murphy Literary Agency who are in between deal and publication). Last week, my fabulous friends and fellow Emus threw me THE BEST LAUNCH PARTY EVER to celebrate the upcoming release of BE A CHANGEMAKER! (They went a week early, since Lindsey Lane’s EVIDENCE OF THINGS UNSEEN is releasing at the same time. I’ll be helping them celebrate that launch next week!)
They were all so generous, authentic, and hard-working in bringing the daily posts to life (as they are with everything they do!), and I was thrilled anew every morning to see what they had put together. In case you missed them, please go check out their posts. They’re fun, informative, and inspiring!
Here’s the roundup:
On Monday, Lindsey Lane (with some backup support from Tara Dairman), posted Welcome to the World: BE A CHANGEMAKER by Laurie Ann Thompson!, which included stories of and interviews with five other Erin Murphy Literary Agency authors who are changing the world in their own meaningful ways:

Tuesday featured several videos compiled by Megan Morrison, BE A CHANGEMAKER: Words of Wisdom. The clips contain contributions from fellow Emu Debuts bloggers offering their own words of wisdom, sharing quotes that motivate and inspire them, and giving advice they wish they’d gotten at the beginning of their journey. Great stuff, and so personal! It’s a great way to get to know these wonderful people a little better.
For the Wednesday post, BE A CHANGEMAKER: Celebrating with Quotes!, Jennifer Chambliss Bertman compiled and created a collection of gorgeous images featuring quotes that inspire and motivate the members of the Emu’s Debuts blog team. If you want to spice up your Facebook or Pinterest feeds (or your office walls!), there are some fantastic finds here. Plus, they included the explanations behind why the quotes are so meaningful for them, making them even more special.
For Thursday‘s post, Penny Parker Klostermann, gave readers a sneak preview of Be a Changemaker with excerpts of the first 25 pages as well as the event planning chapter. Her post, BE A CHANGEMAKER: A Tool for Change, gives a sense of how the book can be used as a tool by individuals, teams, and classrooms.
On Friday, Tamara Ellis Smith closed out the party with Music to Be A Changemaker By, an inspirational and motivating Spotify playlist of songs recommended by the Emu’s Debuts bloggers, along with the explanations of why they included them. Spanning genres and emotions, you’re sure to find something of interest here–I know I did!
I’m so grateful to the awesome authors at Emu’s Debuts! Thanks to them, the Be a Changemaker pre-launch week was better than I ever could have imagined. I’m looking forward to each and of every one of their debuts–coming soon! 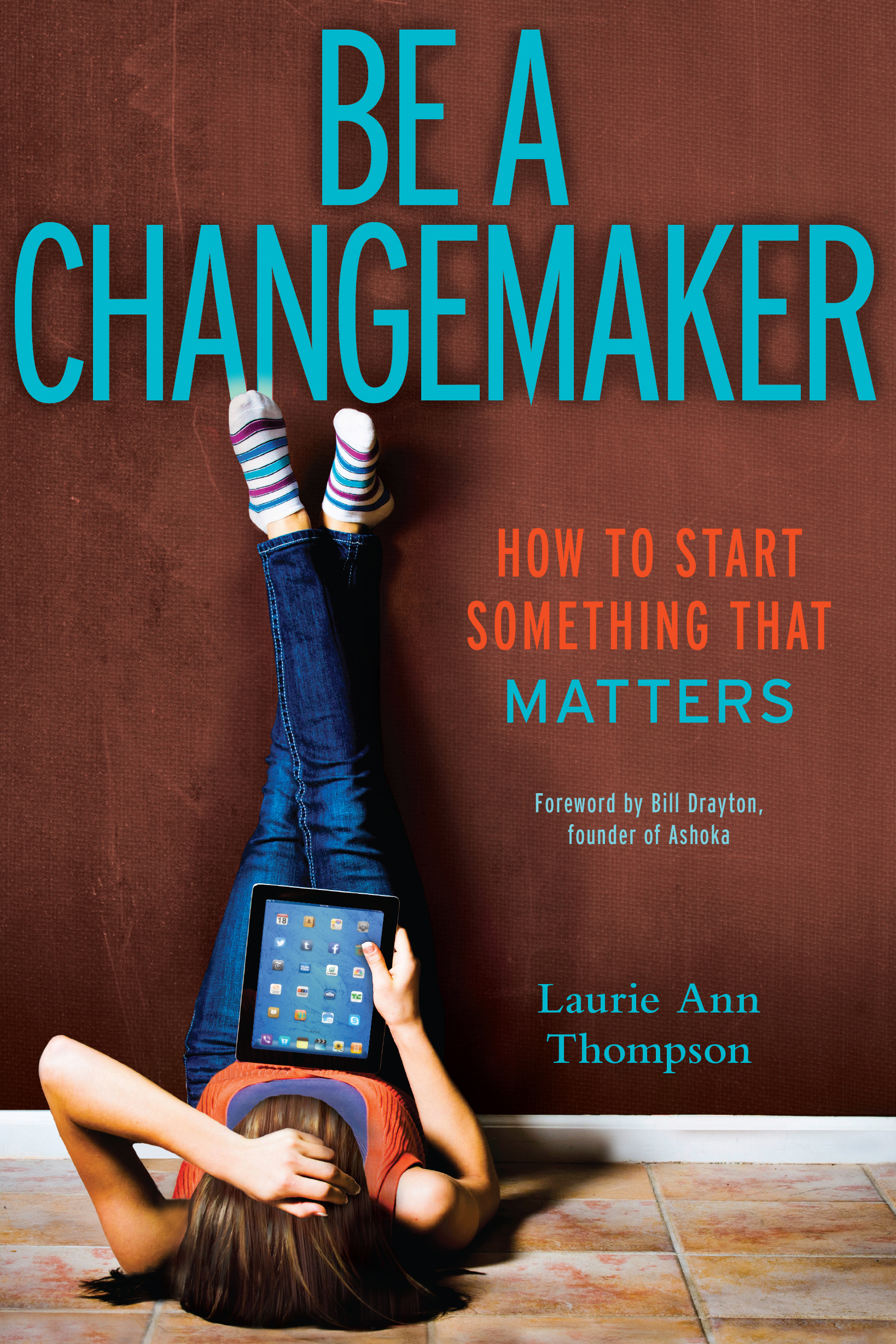 Please come celebrate the release of my first book:

Eat, drink, mingle, hear more about the book from the author, and—best of all—meet some local teens who are already changing the world!

I hope to see you there!

If you can’t make it and would still like a signed copy, you can order from Secret Garden Books here (please indicate how you’d like it personalized in the “other notes about your order” field and leave an extra week or two for delivery).