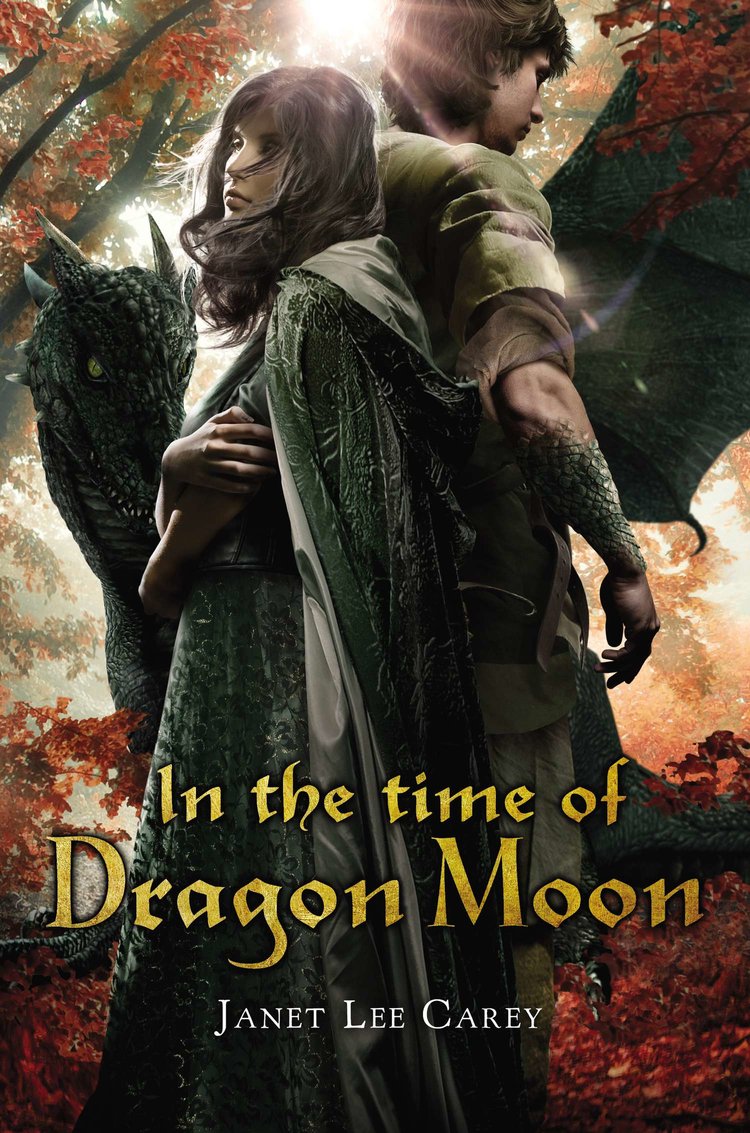 LT: Where did you first get the idea for this particular book, and how did it end up growing and changing as you brought it to life?

JLC: The passion to tell the story of an indigenous healer formed when I flew to Hawaii for a “Maui Immersion” with indigenous healers Lei’ohu and Maydeen. I was profoundly changed by these women’s healing practices as I learned of ancient traditions and the power of the earth’s healing. I knew I wanted to create a story around a female healer, thus Uma was born.

JLC: Jackrun’s story took shape at the same time. I knew they would meet and become embroiled in dangerous castle intrigue involving prophecy, magic, and murder. The novel went through many transformations. I wrote the first draft in both Jackrun’s and Uma’s viewpoint. Later, taking advice from my editor Kathy Dawson, I changed it to a single viewpoint to reveal more of Uma’s personal journey and increase plot tension.

LT: Oh, I love hearing the origins of the female healer story! And it’s so interesting to hear about the viewpoint change.

LT: On a related note, here’s a question from my oldest child (whom you know happens to be one of your biggest fans!): “Why dragons?”

LT: Ha! I love that the dragons are entering of their own accord. But speaking of English queens… It seems like a bunch of research went into this book. Can you tell us about that? Was it different from previous books? Were there any surprises or stumbling blocks? Do you think you’ll reuse any of that research in future stories?

JLC: All the research I’d done on medieval life for the first two books helped this book enormously. That said, In The Time of Dragon Moon offered a brand new set of challenges. This time tribal medicine had to play a vital role. I created the Adan’s medicinal approach from many sources starting with books about medieval medicine, and expanding to books and articles on tribal medicine, preferably written by indigenous healers themselves. I was also privileged to listen to firsthand accounts of traditional healing practices. All these influences quickened my imagination and helped me create the Adan’s close relationship with plants, and his healing philosophy. The research also compelled me to help save the rainforests, where plants vital to healing are even now being destroyed. Help out here.

LT: Janet, you’re one of the most creative people I’ve ever met, and that’s saying something given how many authors and artists I know! Can you give us a tiny peek into how your creative process works?

JLC: Wow. Thanks for that, Laurie. We’ve talked a lot about creative process in my novel writing courses and the rule is always ‘Do what works for you,’ so knowing my process may not be the same as yours or anyone else’s, I’ll share a bit about what’s worked for me over the years. I start each day as tabula rasa as possible, beginning with yoga, meditation, and prayer then moving into short spiritual readings from a few books, and journaling – morning pages right out of Julia Cameron’s The Artist Way. All of this readies me for creative flow.

JLC: When the kids were school age I broke the morning up, doing the yoga and meditation before getting them off to school, and the rest of the things after. Mediation clears my mind and readies me for journaling which is “active listening” on paper. The journal pages usually drift toward what’s happening in the book so I move to the office and begin writing. The process sounds time consuming but it works for me. Also, aside from my lovely critique group the Diviners, I belong to an artist’s group with fellow authors, painters, musicians and sculptors called Artemis.

JLC: When Artemis gets together, we take turns sharing about our creative process. I learn as much from the visual artists and sculptors as I do from fellow authors. These sessions sizzle with creativity. Photo below of our yearly River Rock Ceremony. We throw stones in the river with our wishes, plans and dreams. Hours of kerplunking fun! 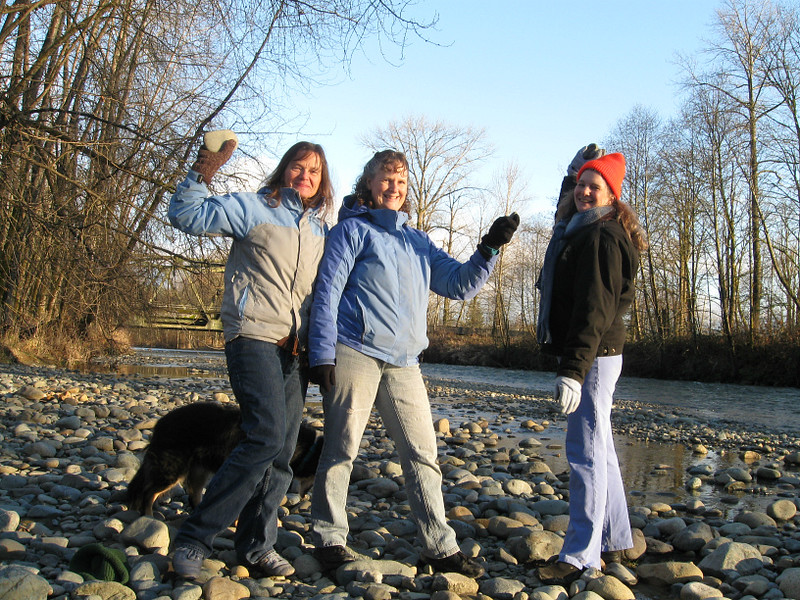 LT: Ah, wishes, plans, and dreams… the perfect segue to my next question: Whenever I’m not writing, I feel like I should be; but whenever I am writing, I feeling like I’m neglecting other important things in my life. What tricks have you learned for balancing your writing with the demands of keeping up with the industry, promoting existing work, taking care of your home and family, personal recreation and self-care, etc.?

JLC: I once made the mistake of confiding this very thing to a soccer mom and she looked at me like I was off my rocker! Here’s the thing. I think writers feel compelled deep down to write. When we neglect it for a while, we get the niggling feeling that something is wrong. When we neglect it for too long, we feel depressed or angry. Once we give in to the urge and actually sit down and write, we feel a great deal better. But then as we write, the laundry piles up and the dust bunnies gather fomenting war under the beds, and our children want a really decent dinner and we feel guilty for having taken so much time away to write, so we go back to our daily duties (the ones other people understand). Then we begin to neglect our writing and start getting that niggling feeling that something’s wrong all over again. There is No solution Laurie T. and I’m not even going to go into taking necessary time to stay in shape or keep up with the industry and launch your books once they’ve been written. The only thing you can do is to be kind to yourself and your family and to accept that things will rarely feel in balance. Bottom line your children will survive and you will get some writing done before you die.

LT: “Bottom line your children will survive and you will get some writing done before you die.” Words to live by. Thank you, Janet!
LT: One more question for you: I think every book teaches us something new, about the world, about ourselves, or about the craft of writing. What have you learned as a result of writing this book?

JLC: So well said, Laurie! Craft wise I challenged myself to leap and loop. To leap into new scenes and briefly loop back and catch the reader up to anything important that happened between scenes that affected the character emotionally. I’m still trying to perfect this fabulous technique. As to what I learned from the book, I think Uma’s personal strength as she’s trying to heal Queen Adela’s madness taught me something vital about love, acceptance and the kind of deep healing that women often do which is overlooked or taken for granted. As Uma’s medicines fail, she simply bathes the queen, combs her hair, and sings to her. Uma simply stays by the woman’s side, for as Uma says, “Joy and sorrow are songs women have long known.”

LT: Breathtakingly beautiful, Janet.  Thank you so much for answering all of my questions!
Are you hooked yet? Here’s some more information about Janet and the book…

About the Author:
Janet Lee Carey grew up in the bay area under towering redwoods that whispered secrets in the wind. When she was a child she dreamed of becoming a mermaid (this never happened).She also dreamed of becoming a published writer (this did happen after many years of rejection). She is now an award-winning author of nine novels for children and teens. Her Wilde Island Chronicles are ALA Best Books for Young Adults. She won the 2005 Mark Twain Award and was finalist for the Washington State Book Award. Janet links each new book with a charitable organization empowering youth to read and reach out. She tours the U.S. and abroad presenting at schools, book festivals and conferences for writers, teachers, and librarians. Janet and her family live near Seattle by a lake where rising morning mist forms into the shape of dragons. She writes daily with her imperious cat, Uke, seated on her lap. Uke is jealous of the keyboard. If Janet truly understood her place in the world, she would reserve her fingers for the sole purpose of scratching behind Uke’s ear, but humans are very hard to train. Visit her website here.

Thanks again to Janet Lee Carey for appearing!