In the interests of pushing myself out of my comfort zone, I recently finished a class in magical realism. It was drastically different from anything I’ve done (or even read, really) before, and the results were, well, interesting. The final assignment was this: “For this assignment, take the notion of a garden (well tended or neglected, your choice) and play with its realities. Find the most mundane aspects of it and elevate them to magical heights. Take the miracle of a seed and turn it into something ordinary and bland. Juxtapose ideas to rebel against expectation. A garden, after all, is not what you see above the surface, but what builds it from beneath.” And here’s what I came up with: 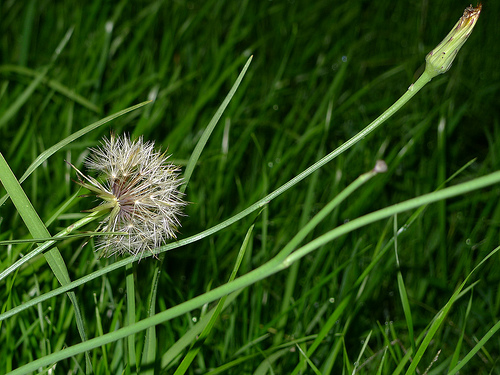 She doesn’t even know I’m here, in her beautiful garden. But I’ve been hiding in plain sight for years. At first, she could not have noticed, no matter how hard she tried, how carefully she tended her plants and flowers, turning the soil and pulling weeds. I once was but a seed, deep under the ground, waiting.

Finally, the time was right. I split my shell silently, sending my tendrils out into the garden, urging them to take root wherever they would. I knew she would not see me then, either. She loved her garden, but she cared for it sporadically at best. Once a year she would give it a good look, fixing the most obvious problems, and making a note to watch the rest. But the rest of the time, she took its bounty completely for granted, playing with her young daughter on the patio or rocking with her husband on the swing. By the time she noticed me, I was sure, it would be too late. The garden would be mine.

My tendrils continued to spread, silent thieves in the night. Some found fallow soil, withered, and died. But others took root in her fertile ground. I could feel them winding their way through the flowers, stealing their nourishment, choking them out. It fed me, and I grew.

Eventually, feeling among the flowers, she noticed me—a small lump that did not belong there, had not been there last time she looked. Had it? I could see the recognition on her face, the brief wave of panic. I was afraid too, it was too soon, too soon. My roots were not deep enough yet. They could still be pulled if one knew how.

Denial. Best friend to all that is evil. She had looked me in the eye, and decided to ignore what she knew to be true. “I am too young, too busy, to have to deal with this,” she told herself, and she pushed my existence to the back of her mind. She was not yet brave enough to face me.

“Grow, grow!” I urged the tendrils, just beginning to bloom into full-grown plants in their own right. “The garden is almost ours.”

Any idea what I’m talking about? Think it needs an ending, or is it better left right here?